We hear a lot of stories and stats on how social media can benefit organizations by helping them connect with customers online. As a matter of fact we put together 3 great examples of online customer service that every small business should aspire to.

However, the same social media tools can also have the opposite results for organizations: negative aura surrounding the brand. How is this possible? For one, no one can control the flow and spread of content online – if people start sharing something you cannot stop them from doing so. Screenshots, clippings and saved information make it impossible to bury something away. The best way for your business to avoid becoming part of a wide-spread bad social media marketing fiasco is to be aware of digital do’s and dont’s.

Let’s take a look at and break down actual, historical examples from some well recognized brands and how their social unawareness led them to negative out-lash (so that your business doesn’t do the same):

1. DiGiorno Pizza Ends Up On the Wrong Side of a Social Rights Movement

Social media platforms have become great networks for spreading the word about social rights movements. They’re able to amplify the voices of those who usually wouldn’t be able to have one. As an example, in the early 2020s we have Greta Thunberg taking on the world by highlighting climate change injustice for the younger generations. A few years before that there was a #WhyIStayed movement helping give a voice to women of domestic violence. Unfortunately, someone at DiGiorno Pizza (well recognized frozen pizza brand) saw the trending hashtag as an opportunity to promote their pizza. Why was this a bad move? It was a touchy subject – they did not use it to show empathy to vicitms nor did they meaningfully contribute to the movement. It was intended as a selfish promotion. You can see the difference of tone in the tweets between actual victims vs. DiGiorno below: 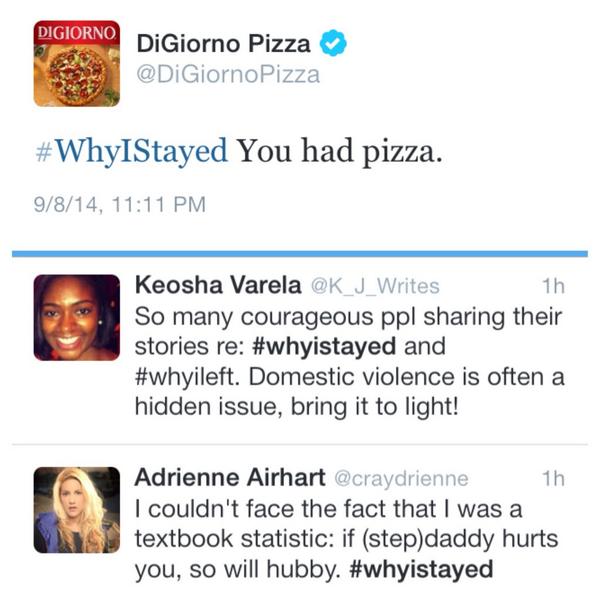 Shortly after coming to light (as a result of negative backlash from the online community) DiGiorno had to go on an apology spree that cost them. Trying to save face in the light of a serious subject matter: 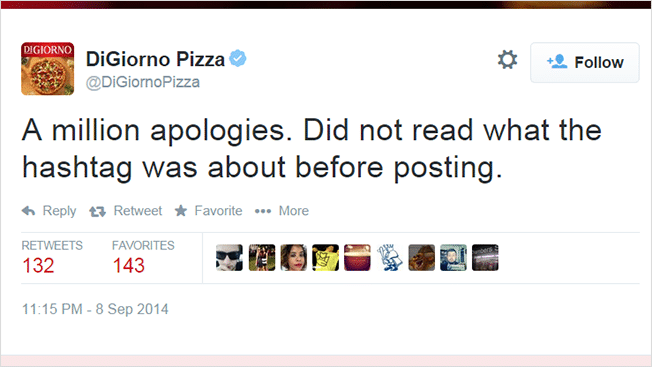 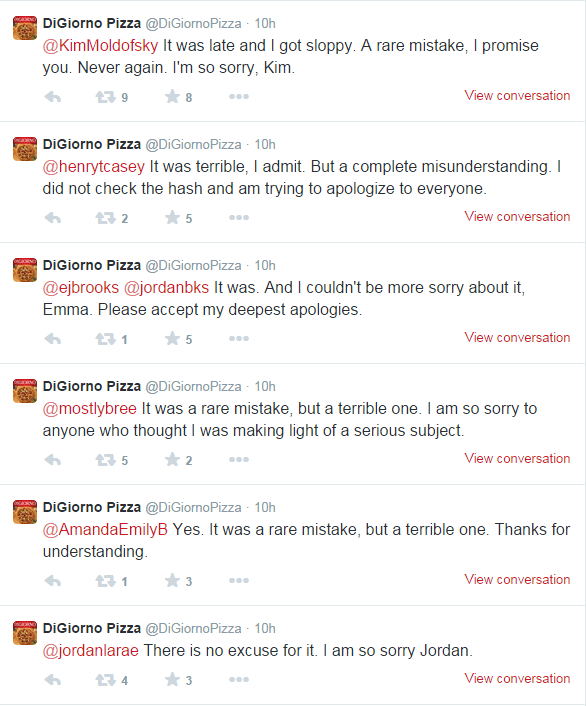 What is the lesson to be taken away from this specific example? If your organization is going to participate in a trending rights-related topic, or a global pandemic (like COVID-19 happening right  in 2020), make sure that you’re contributing in a meaningful way as opposed to trying to capitalize on a trending topic to simply promote your products or services. Better yet, avoid using trending hashtags that have nothing to do with your business. These topics have their intention, so if you’re selling pizza it probably isn’t relevant to domestic violence unless your organization is donating to a charity that supports victims. And even then – it shouldn’t be used for promotional purposes.

This series may be long behind us (for all the non-NBA fans: Dallas Mavericks faced the Houston Rockets in the opening round of Western Conference playoffs in 2015), but there is another story that developed out of the Rockets’ 4-1 series victory: their social media manager. Why?

Well if you’re familiar with the Godfather movie series, the below tweet will make sense: 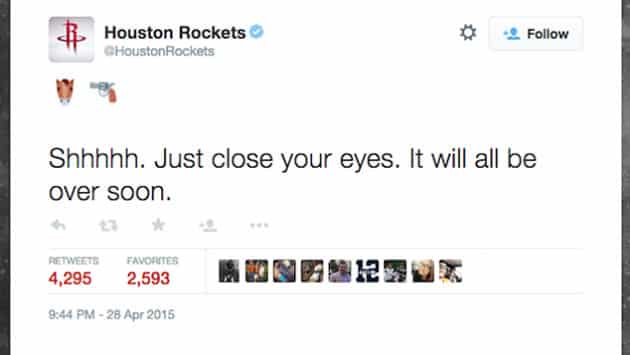 If it wasn’t enough that the Dallas Mavericks were getting beaten in the opening round – they had to put up with the above. But it wasn’t only the Mavericks who had concerns, there was a number of animal activists who found the icons offensive (horse getting shot in the header; you can see the reference to Godfather on your own if you’re really interested).

A lot of people would argue this is just friendly/competitive banter – one team out competing another and simply letting them know. Actually, the office Dallas Mavericks page responded in a classy way (after the Houston Rockets officially apologized of course): 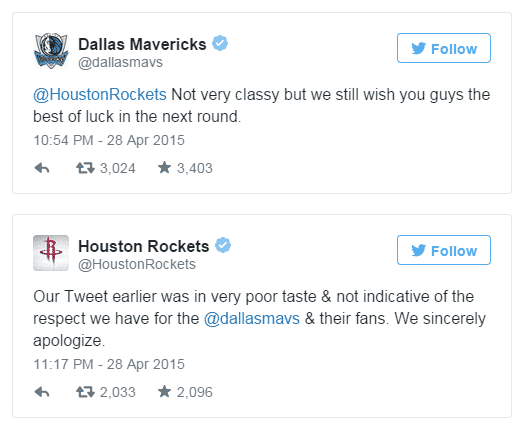 The employee eventually got fired and got some publicity from the whole event, eventually landing another job. But the question remains, why was this an issue for the Rockets and other audiences?

It’s good to be different and push the limits to differentiate your brand. However, you have to be careful not to step over the line and clearly for some people this tweet was stepping over the line. While the argument can be made that “it wasn’t so bad” others thought it was – which resulted in the employee losing his job and the Rockets getting some negative publicity online.

Alright, if you thought the above example was not bad at all, just look at the interactions below. Unfortunately I did not include all of the screenshots (which were gathered from Mashable’s original post) but the below clearly showcases the meltdown of this company. 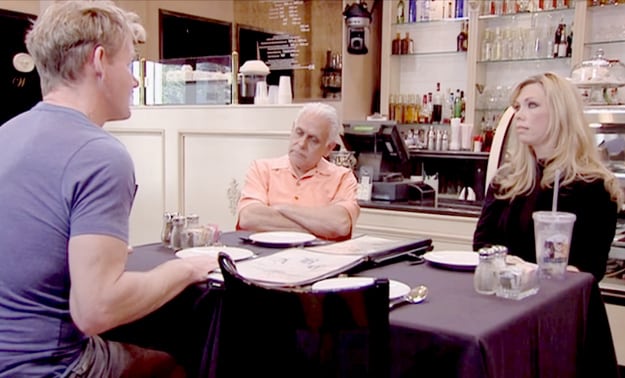 NOTE: This is a bakery company which was featured on Gordon Ramseys’ Kitchen Nightmares show and afterwards, the following transpired on Facebook, Reddit and other online communities (brace yourself): 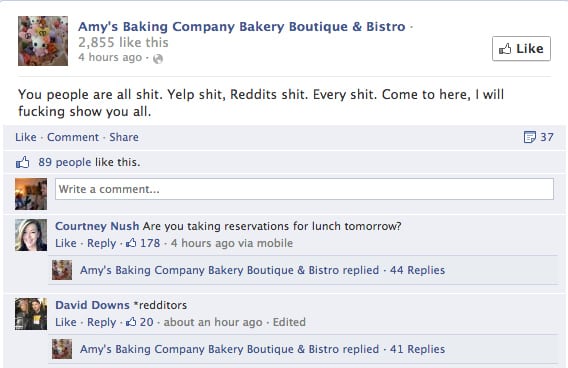 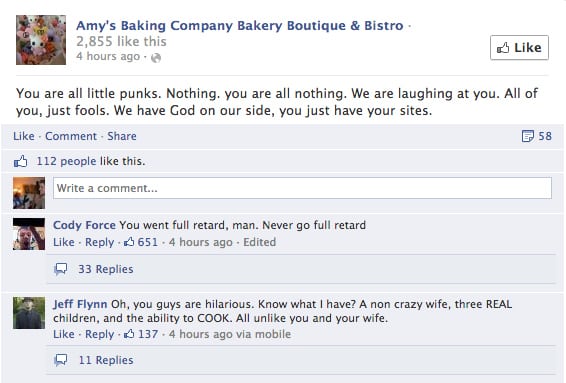 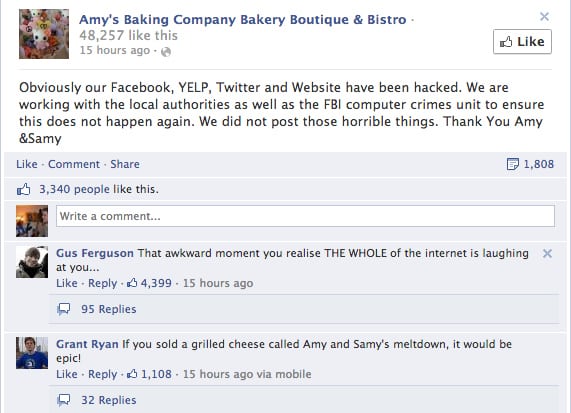 Oh boy! How did it ever get this far? Well after people found out that their Bakerys was just buying cheap cakes and re-purposing them as “luxury” at a much higher price, they confronted them on social media. No one likes to be deceived.

It simply picked up and people started giving bad reviews (even their own employees spoke out) based on previous experiences (hence why they were on Kitchen Nightmares show, things weren’t going that great) and taking advantage of the deception.

What went wrong here for the brand?

They lashed out immediately, instead of admitting their mistakes and apologizing to everyone who was affected they went out and said MANY inappropriate things, tried to cover up their tracks and even threatened the audience with references to a deity (God) and legal action (lawsuit). The more they threatened and spoke back, the worse the comments got. Eventually the sharing became huge that people from other countries joined in – there was no way to control the levels of comments coming in (Amy’s Bakery tried to control who says what, which is not how the digital world works).

Remember: honesty, taking responsibility for your actions and actually admitting that you may have done something wrong are not seen as weaknesses or shortcomings. If the Houston Rockets can do it, this much less known brand can (and should have) as well. Perhaps they should have hired a professional to deal with their small business social media crisis instead of doing it on their own.

PS. Saying that your accounts have been hacked after flipping out will not get you anywhere either!

CD sales have significantly declined since the introduced of MP3 players & iPods. Which, for HMV among other music album companies, spelled trouble: declining sales, letting go of employees, etc.

What made it slightly more troubling? An employee (intern) who was responsible for social media got a hold of the Twitter account once they found out that majority of employees will be getting laid off and proceeded to send the following updates:

Why did it get to this point?

The Director of Marketing doesn’t know how to “shut down” Twitter. As a matter of fact, he didn’t even know who was managing it. Imagine giving your entire brand perception into the hands of someone you do not know, or something you do not understand. Yikes!

First off all, all levels of the organizations should be familiar with who is responsible for managing social media profiles. Regardless of their position, title or seniority.

Secondly, the Director of Marketing should have been at least somewhat familiar with Twitter as this is a powerful marketing tool. You do not dive into something without trying to understand (the basics at the very least) how it works and how you can step in if need be.

Be aware, be proactive and know who is doing what! Social media is not just a fad, but a fundamental part of everyday business. Hopefully the above examples help you understand the importance of social media and how NOT TO BEHAVE online should any uncomfortable situation arise.

Ask questions, answer to best of your abilities, apologize if necessary and/or seek professional help if it gets overwhelming. The long-term health of your brand could be at stake!

New posts in your inbox: 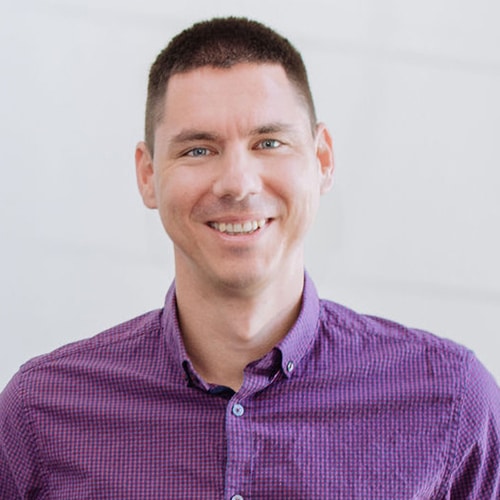 Welcome to the digital marketing space for local business! My goal is to help local Canadian businesses get the most out of digital marketing. I hope this blog provides you with something useful, helpful or informative for your business. I love to hear from real business owners and marketing professionals so please do not hesitate to comment or start a social conversation. Connect, comment and get involved!